On 12-12-12 I went into meditation and asked for guidance on how I/we were to participate on this day. I received the images of holding a formal ceremony, complete with robes, crystals, swords and crowns. I did not receive specific directions on how to proceed with the ceremony, so I knew that Divine Source would orchestrate it as we went along. 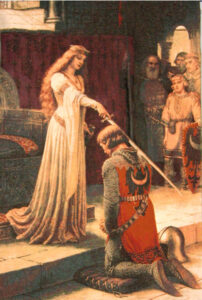 Jason and I were staying with friends in Mount Shasta and they were included in my vision. Upon sharing with them of what I saw, in Divine Accordance, my friend’s husband said that he had a sword. I was shown to use an etheric sword for Jason and that his physical sword would manifest shortly.

We created sacred space by first smudging the room with cedar, sage and lavender. We place a chalice of water, a candle, crystals and incense around us to represent the elements: water, fire, earth and air. We walked clock-wise around the area that we claimed as sacred space. In turn, we each called in the energies of the directions.

The Divine Mother came through me in channeling and spoke to us about anchoring in of the Divine Feminine. We, as well as many others on this day, agreed to be anchors or portals that allowed the Divine Feminine energy to integrate with greater ease into the planet.

She asked us to open our hearts and use compassion and grace to dissolve our emotional wounds. The “clearer” we were, the easier our transition into multidimensionality would be. She also stated that the only thing keeping us and humanity from achieving our Light Bodies was the emotions that we had yet to forgive and transcend into Love.

Divine Mother spoke of humanity moving out of the mental state and moving back into balance by activating the Feminine and heart center. Through which, we would begin to use our minds through our hearts instead of in absence of it.

The Divine Mother spoke specifically of our agreement to come together and herald in the Return of the Feminine. She informed us that for many lifetimes, we each had been in service to Divine Source and protectors of the Divine Feminine Teachings.

She re-awakened our memory by re-ordaining us in the name of the Holy Order of the Sacred Feminine. As She spoke, the memories came forward in our minds. Through me, She ordained my friend first. Then my friend ordained me and I ordained her husband with his sword. I then turned to Jason. I raised my arm as if I held a sword and spoke, “with this etheric sword, I ordain thee into the Holy Order of the Sacred Feminine.” My arm dropped with the weight, as if I actually held a physical sword. I had to use two hands to balance the weight.

I then stepped back into my place and we nodded to each other. We had transcended space and time and our past life memories were as present as today. Our interaction with each other in those lives was distinctively clear. Time was all encompassing in these moments. Past, Present and Future were all in this NOW moment.

The Divine Feminine energy began to whirl in a vortex between us. It amplified to such a degree that we were bowed backwards. Our backs were nearly parallel with the floor. We tingled and vibrated as the energy whirled through and around us. At times, our physical bodies became transparent. A couple of times, I thought that I would lose consciousness.

Then whoosh! The Divine Feminine energy went into the ground; into the heart of Mount Shasta. We each saw that the energy ran through the electromagnetic grid and ley lines and wrapped around the Earth. It illumined all that it touched. When it came back around and upon itself; it met like two massive waves of Light. In this moment, we were righted on our feet and stood straight.

The Divine Mother spoke, “It Is Done” and we folded our hands in reverence. Namaste! We gave thanks to Divine Source, Divine Mother/Divine Feminine, our Guardians and Guides, the directions and the elements; then released Sacred Space.

Each of us was vibrating with energy. We were in such a peaceful, humble state. The vast abundance of Joy and Divine Love that we felt cannot be expressed in words. It is, however, a resonance that we retain within us. It is us and we are one. The Divine Mother stated that, “We will hold the frequency as others raise their vibrations to match.”

With this charge, we, indeed, have to be responsible to ourselves and for others. It is vital that we stay as clear as we can for the Greatest Good! And So It Is! Blessed Be!

Shortly after the completion of the ceremony, my friend’s husband smiled at Jason and said, “I have your sword. I was entrusted with a sword many years ago and told that I would know who it belonged to. It’s your sword!”

How amazing! Jason’s etheric sword, did indeed, manifest in a very short period of time.

When you trust in Spirit-Divine Source, you don’t need to have an advanced script to follow. Just follow your Heart and Intuition. Focus on the outcome and not the journey. Divine Source will always deliver grander than you can imagine!

It truly was a powerful, blessed, magical night!

With Divine Gratitude and Humbled Grace,